The Nose Appears Smaller by Making it Straighter

What is a non-surgical rhinoplasty?

The nose is an important feature of the face. An aesthetically proportionate nose balances the physiognomic features of a person. Traditionally, a rhinoplasty is a surgery that changes the shape of the nose. It requires anesthesia and considerable healing time because of bruising and swelling, and the results are permanent.

Relatively new however, is the medical procedure which is called ‘rinomodulation’ or ‘non-surgical rhinoplasty’. Injectable fillers, most commonly hyaluronic acid, like apriline®, are used to alter and shape a person’s nose without invasive surgery. This procedure fills in depressed areas on the nose, lifts the angle of the tip or smoothes the appearance of bumps on the bridge. It is clear that non-surgical rhinoplasty is an augmentation procedure so it cannot reduce the size of someone’s nose. 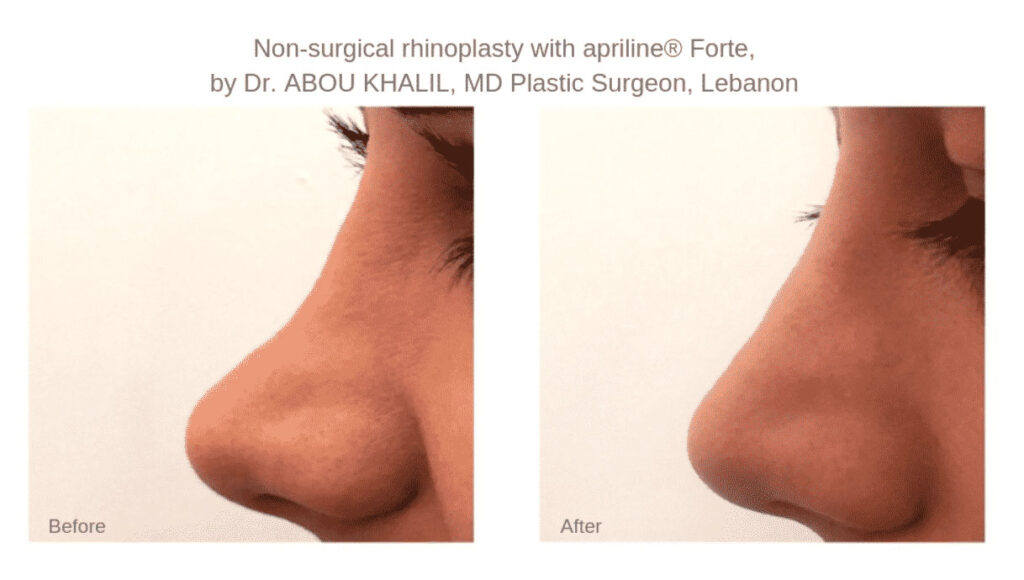 Non-surgical correction is considered for patients with a treatment-suitable aesthetic defect. Contrary to a rhinoplasty, the rinomodulation procedure is not invasive, bruising and swelling are minimal. As mentioned earlier the procedure is not meant to decrease nose size, however it can make the nose appear smaller by making it look straighter. It is frequently used to increase the height and definition of the nasal bridge, as well as augmenting other precisely defined areas of the nose. The procedure is not used to correct functional defects. Non-surgical rhinoplasty is used by patients of all ethnicities.

Inclinations and angles of the nose

Understanding the correct procedure of rinomodulation, it is important to know the 5 different inclinations and angles of the nose, shown in the following picture.